Most of the world's most creative talents first learned to deal with failure.
Posted by Annette Corkery at 11:04 PM No comments:

My thesis is almost complete, but I still keep finding more to read. Thought this raised a few good points about innovators:
http://www.forbes.com/sites/ericaswallow/2012/04/25/creating-innovators/
Posted by Annette Corkery at 1:29 AM No comments:

This is part of my research presentation from the open night for teachers that I held at the beginning of the month. I thought it might be of useful to post it here too. I still have some teacher packs available if anyone would like one, or a digital copy of the booklet email me at corkeryannette@eircom.net. 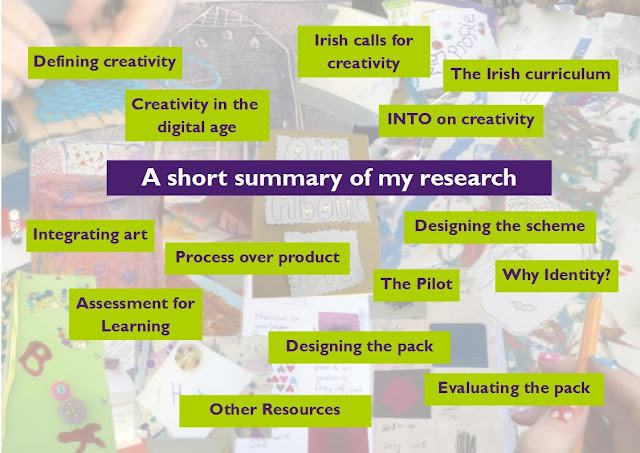 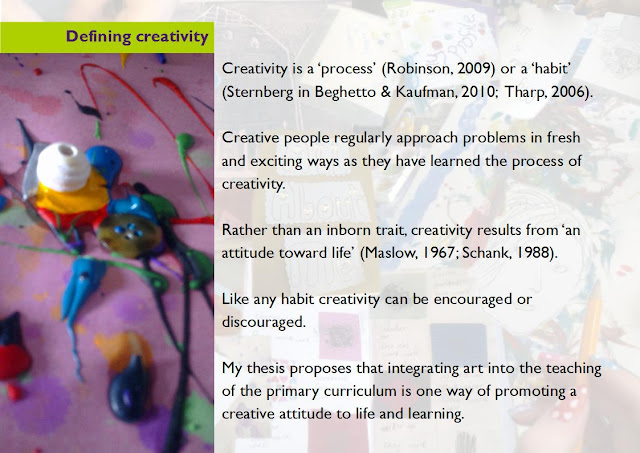 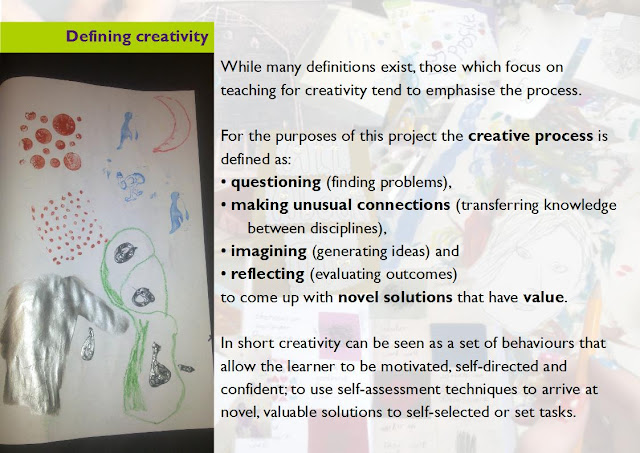 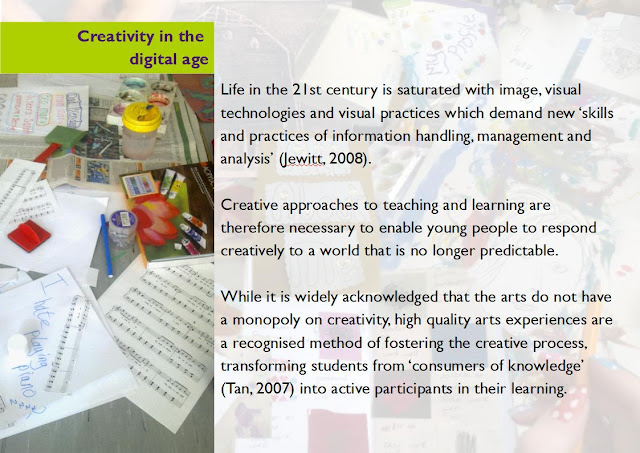 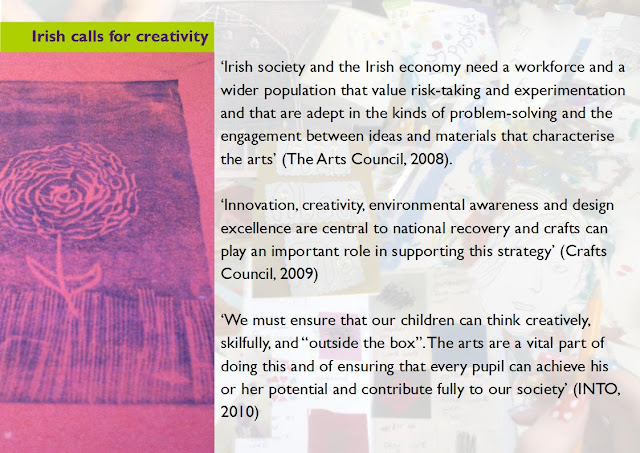 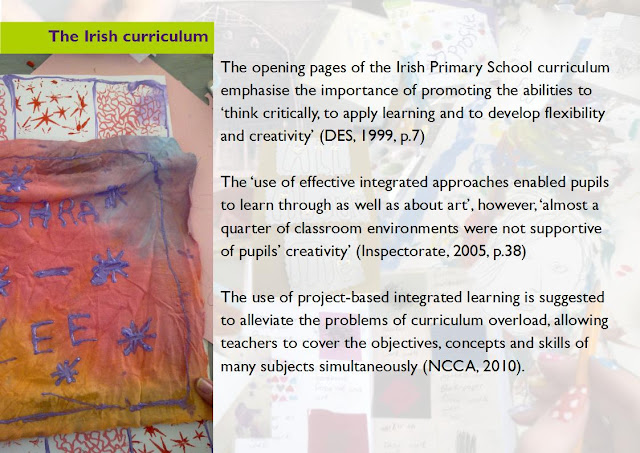 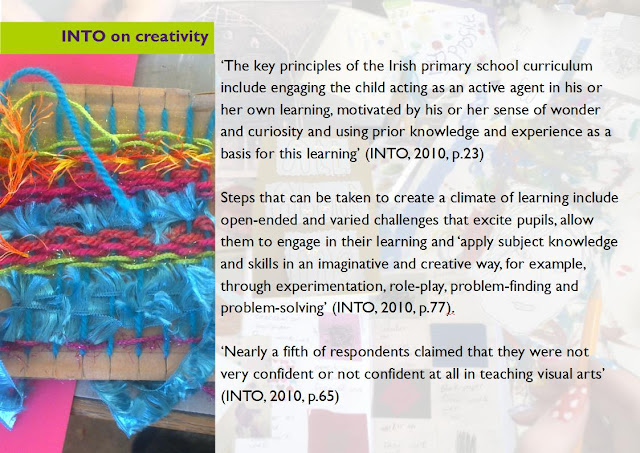 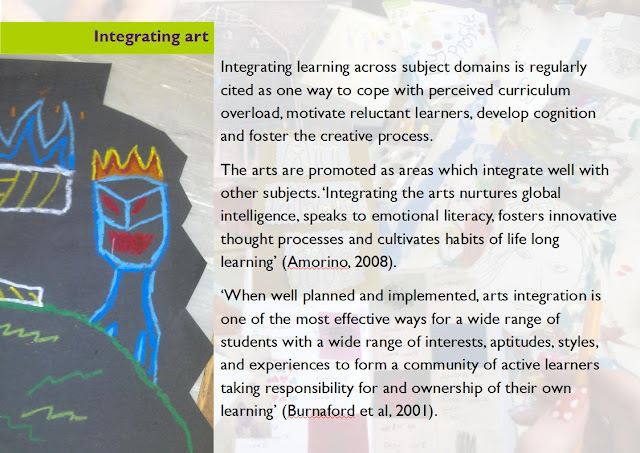 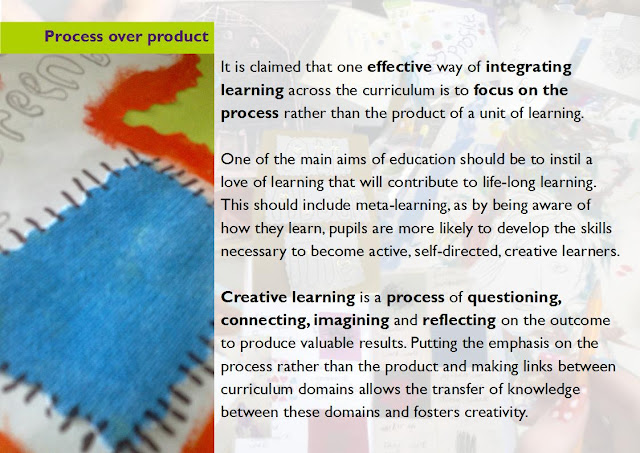 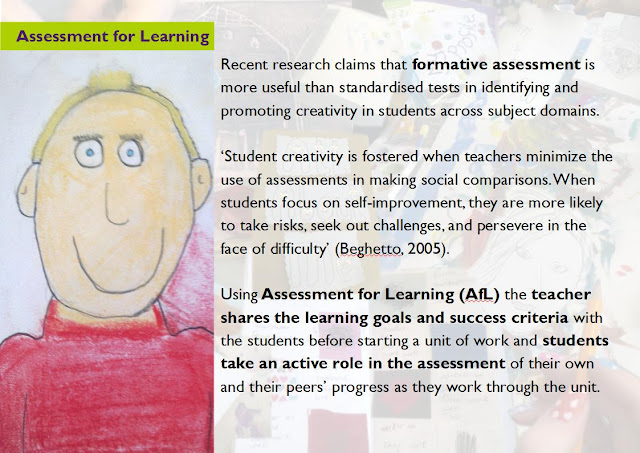 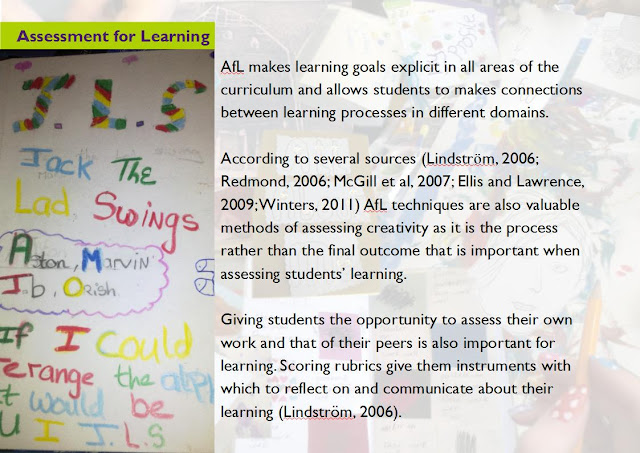 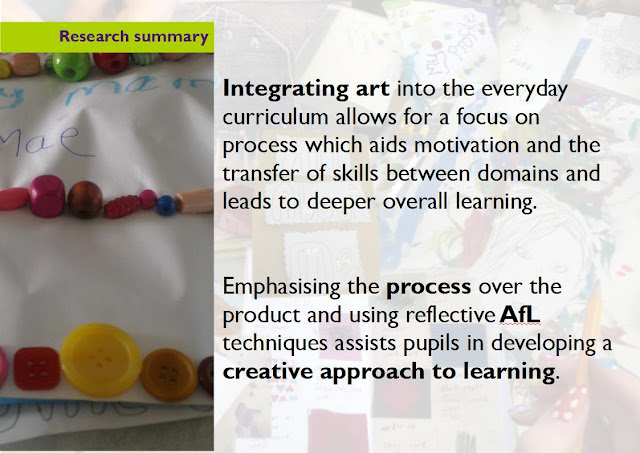 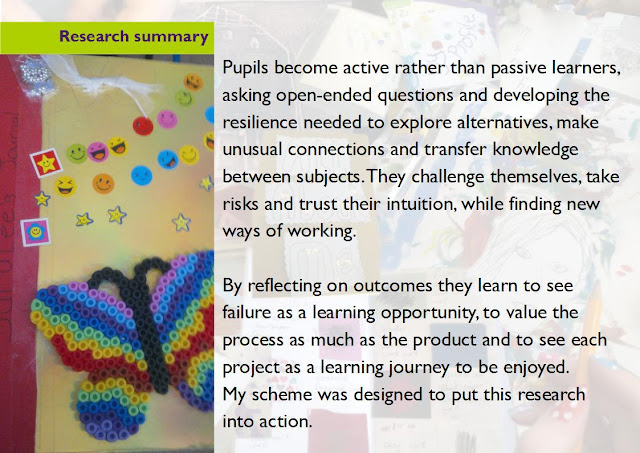 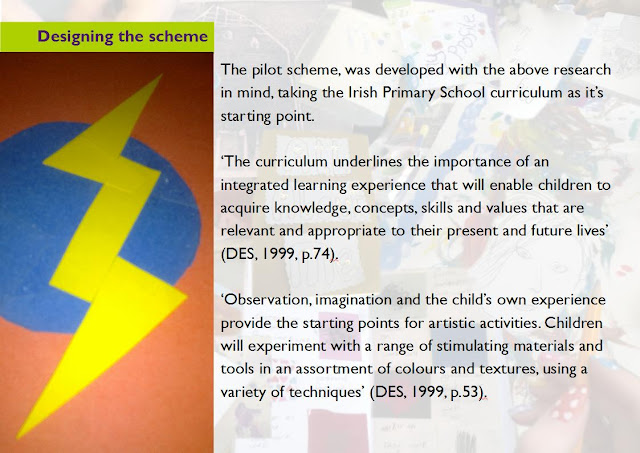 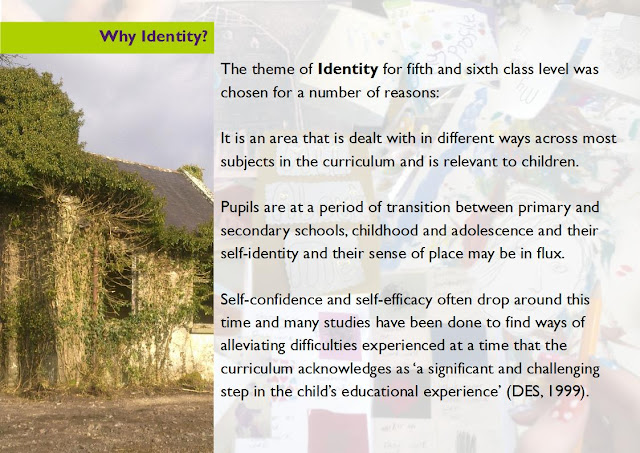 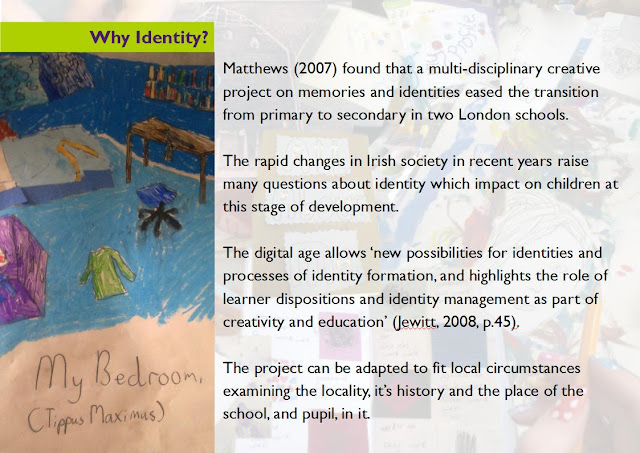 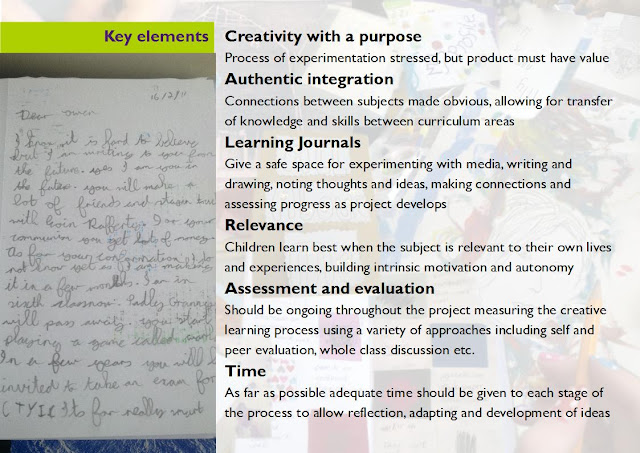 Posted by Annette Corkery at 1:18 PM No comments:

I'm holding a launch and evaluation night for my teacher pack in Ardagh Heritage and Creativity Centre next Wednesday 1st February at 8pm. I've sent invites to all schools in Co. Longford, but anyone else who is interested is also welcome. I will be giving a short presentation of my research so far and the development of the booklet and other resources. As part of the ongoing evaluation of the the teacher pack I will then be inviting comments and suggestions from those present and I'm looking forward to the discussion.

Posted by Annette Corkery at 2:21 PM No comments:

Last November I promised that I would post some sample pages from the Identity scheme booklet here so I'm finally keeping the promise. If anyone would like to receive a screen or printed version of the whole booklet email corkeryannette@eircom.net and let me know. I am currently in the process of organising a focus group of primary teachers to evaluate the scheme materials and would be very grateful to receive comments or feedback here from any willing volunteers. Thanks in advance, Annette. 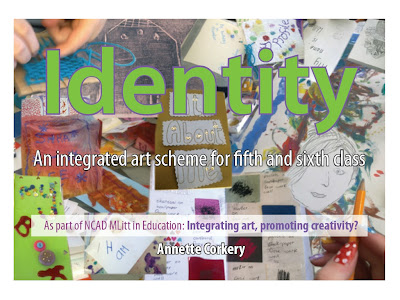 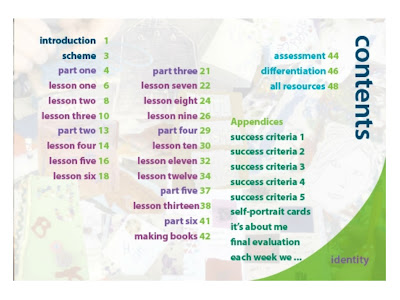 Posted by Annette Corkery at 9:50 PM No comments:

One of the reasons that this blog has been so quiet is that I've been busy with a new venture. In August myself and my cousin got the opportunity to open a new business. The heritage centre in Ardagh, Co. Longford was opened in the 90s in the old school building where I spent part of my Junior Infants year. It subsequently closed and reopened briefly as a restaurant but has been empty for a long time. My mother and my grandfather both taught in the building. The history and heritage of the area, which stretches from ancient mythology, through saints and scholars and famine times to national tidy towns success, formed the basis of many of my own projects in college. Bringing this to life for a wide audience through art has been one of my ambitions for many years and when the chance to take over the building arose during the summer I jumped at it. At the moment we are running creative programmes for children and adults and hope to expand to include arts-based heritage programmes for schools in the near future. You can find out more about what we have done so far at Ardagh Heritage and Creativity Centre and our plans for the future at www.creativeardagh.com
Posted by Annette Corkery at 10:30 PM No comments:

I'm not sure how many people were following this blog, but I'm sure any who were thought I had given up by now. I can't believe how long it has been since I've updated it. I have been continuing to work on the project all the time and posts will be much more frequent from now on.
I finished the pilot project in Glen before Easter and made a return visit to the school in June. I was delighted to find out the most of the pupils were still using their journals as they got ready to leave primary and start secondary school in September. I hope they have all settled in well by now and thank them again for the effort they put in to their Identity books.
I'm posting video clips of three contrasting finished books here now. All of the rest of them were equally unique as they each approached the project in very different ways.
The first example chose to take an abstract approach to the book, creating it from a single sheet, with lots of different art techniques and colour, but no recognisable pictures. The second is more traditional in style and mixes image and text in a basic but effective way, while the third is mainly image based using humour and a variety of illustration techniques to get its message across. The audio is from the final evaluation which I videoed. We had done a trail run before which actually worked much better than this version as the class had not seen each others' books in full before and asked much more interesting and deeper questions and gave fuller explanations of their own work. If anyone would like to see more samples just email and let me know.
I have completed a scheme booklet which includes lesson plans, resource lists and curriculum objectives and comes with a few video clips to allow teachers to carry out the project with their own fifth and sixth classes. I will post some sample pages later and if anyone would like a full version of the document I will email it or post a copy on if you send me your details to corkeryannette@eircom.net

Posted by Annette Corkery at 11:37 PM No comments:

Annette Corkery
I've been a graphic designer and art teacher for many years. A few years ago I completed a BA(Hons) in Literature. Modules in Psychology and Sociology led me to research into the connections between arts education and cognitive, social and emotional gains and art's role in tackling educational disadvantage. At the same time I spent a year as a learning support teacher in a primary school where I often used art as a learning tool. I then decided to investigate primary teachers' attitudes to creativity in the classroom as part of my MLitt in Education through NCAD. With the overall aim of boosting creativity this evolved into a pilot scheme and a teacher pack on the theme of Identity which integrates art across the curriculum and allows children to explore their world and their place in it focusing on the process of experimentation with art.